As I commence a round trip on the Blue CAT bus (Perth Central Area Transit route 1) I hope to recite the memory of the past month to share fragments of my storytelling of Perth. Before I plunge for a fleeting moment into the canyons of my mind, I note that the bus tours the changing landscape of Northbridge and the CBD, an acronym for Central Business District.

Perth is classically (stereotypically) beautiful; enhanced by its idiosyncrasies that remind me of Alejandro Jodorowsky’s 1970s surrealist film, Holy Mountain. Crossing an urban grid of just one mile square of arts and commerce, both progressive and conservative, being devoured by redevelopments and much, much more; nevertheless, I can but reflect on repeated visions of my previous visit to Australia, 15 years ago. As a farewell gift a friend elegantly boxed a mixed audio cassette tape of the sounds together we had experienced. So no better way to present this piece as my mix-tape to Perth and the surrounding region before I once again depart.

The first 48 hours in Perth were an upshot in rhythmic and hypnotic form, meditating upon subterranean homesick blues falling in and out of a cocktail of insomnia and sleep paralysis. The challenge was how can my instinct process this shift in time.

Post 48 hours, the allure of Perth’s cultural district isn’t merely that of the PICA (Perth Institute of Contemporary Arts) residency I am undertaking, doing exactly what it is meant to do, but that of an adventure and place of thought to experience diverse inhabitants: improbable links from one to the other.

Step into AGWA, yet again an acronym. The Art Gallery of Western Australia is a curiosity cabinet of contemporary, artefact and antiquities. Because it marks its compliance with aesthetic rules that compels us to feel and experience; viewing several of the gallery displays is a moving, numinous thing.

Winding forward to different aspects of creation, I am faced with the awareness of embroidery techniques. A rather forgotten technique, according to curator Dr Anna Sabadini, as she leads a personal account of the exhibition, Over Here, at Nyisztor Studio, Fremantle. I received the pleasure of this impromptu tour with Dr Anna Sabadini and a symphonic quality discourse with artists Anne Walmsley, Kate Campbell-Pope and Kati Thamo. But although all four are of harmonic regard, I am drawn by how much the exhibition reveals of the traditional styles of embroidery that are defined by temporal simplicity, a trait in absolute mastery of itself and its self.

Occasionally, you see particular artworks doing a particular thing and even if you know little about them, or their mechanics, it is evidently clear that this is exactly how it’s meant to be done. Gotham Studios, Western Australia’s longest running artist-run initiative, epitomised this particular thing. Set as an intervention, Christopher Crouch’s office is an integrated shrine to Vladimir Lenin: The Institute of Leninist Metaphor Reading Room. The Lenin in Exile project started as an ironic commentary on the gaps in Australia’s writing of its history. The story that the British discovered the ‘vacant land’ of Australia is one continually perpetuated. It seemed to Crouch that if there were gaps in Australian history, he could appropriate them and add his (fictional) historical anecdotes of Lenin’s exile in Perth.

Side B: Western Australia

Also significant is the magic of distance, isolation and this ‘otherness’ adds further enchantment to the visual art of WA, because to captivate, first, something must be captured. So not without naivety, a takeover of the PICA Instagram account seemed the ideal opportunity to capture the Indian Ocean Drive.

Art has always been considered the embodiment of free expression; its ability to express the concepts, emotions, critiques, and representations of humankind throughout history is unquestionable. So it is refreshing to marvel at Aboriginal artworks that are defined by features and uniqueness rather than obeying standards that make them Western-ly common. They relate not only the length of conception and gestation, but offer a rare glimpse of spontaneous creation; a work of art performed not for the art market but for its own sake. Some people have come to know this bid for mastery; artists competing not against one another but against nature as represented by their traditions.

The US rap artist Mos Def once commented that ‘Life is beautiful. Life is a struggle. Life is a beautiful struggle.’ We can only grasp what is aesthetically pleasing about something that is aesthetically pleasing up to a point, because eventually, emotion and sensation take over. And describing that is like trying to put surfing into words or telling someone who has never ridden a wave what it’s like to be high.

However, the distinct allure of WA is not only in its nature but also its rapture. Even as the Indian Ocean Drive begins, there is no initial aim beyond the effects of cultural edification and perhaps several charming beaches. Storytelling is a subjective impression, but after a point, it becomes an objective fact. You only need to experience Joris-Karl Huysman’s writing, stand-up comedy by Hannibal Buress, Alice Coltrane’s singing. Fact. Similarly, anyone claiming indifference towards the Indian Ocean Drive is most likely seeking attention.

Equally mesmeric, are the Pinnacles where you have to be imperviousness to mortal fear because of the spectacular manner in which they capture aspects that somehow please our senses and soul: presence, symmetry, curvature, and flow.

It has become fashionable to describe the measurables in art as ways in which it is global, that is to say, a tactic used to take control of moments of recognition. Despite the specific and distinct measurable characteristics underlining what is unique in Australian visual arts, the reality is a profound contrast. It is not an easy task to discover at first sight the traits, discourse, ‘genius loci’ between different states. In interpreting these characteristics, I am struck by how much it reveals of a plea for greater understanding and connection between people as they exist and interact locally, regionally and nationally. Several forms are unique, representing a coherence tied together in myriad ways that are, when all is said and done, the zenith of the arts and culture.

As I disembark from the Blue CAT 1 bus, and my mixed audio cassette tape nears its end, it is said that passage is without point or purpose if addressing the usual signifies a misguided attempt to quantify the unquantifiable. The best example of this, on my last evening in Perth, is Tracey Moffatt’s zestfully provocative commentary (just “brilliant!”) married to the global substance commentary of the Australian Council for the Arts Venice Biennale 2017 power-ball speech. It is not to say that the two are unrelated, but the rich complexity can be seen in a fitting together of a double helix.

Perth is a particular kind of place, which flourishes as many worlds in one place.

It services many stories without quite integrating them, even though several cross over to exist in multiple worlds. My storytelling is not the oracle of Perth by any means, but there are layers of the city’s on-going exploration of critical regionality that carry charged meaning. Charting its flora, its fauna, its topography and our imagination invites us to search out those layers. 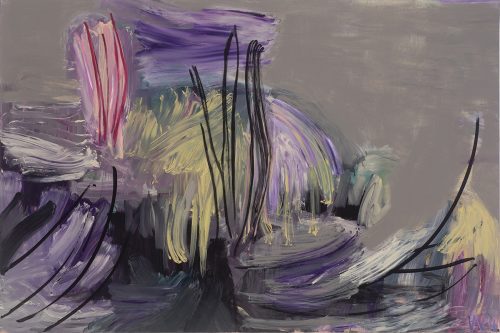 Vicki Varvaressos had been painting for more than two decades when she first started producing abstract works. “I remember when I first did it,” she says, “it was probably quite shocking!” 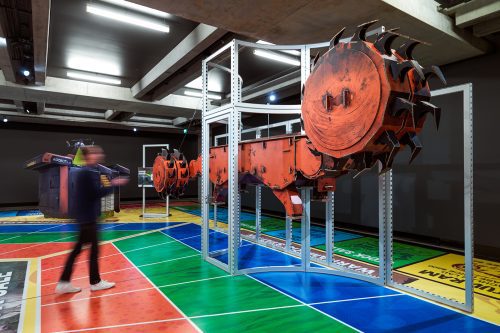