In a nondescript warehouse in Northcote, Melbourne, artist Ann Debono leads the way to her studio. The plasterboard corridor beyond which lie artists’ studios is narrow and twisting. Debono, who graduated from the Victorian College of the Arts (VCA) in 2015, hasn’t had many visitors here. “I wonder how it looks to outsiders,” she reflects, “there’s something Kafkaesque about this labyrinth.” Inside her studio, which is around about the size of a modest bedroom, there is very little decoration; Debono has a preference for a deliberate sort of “ugliness” as she calls it. A skylight lets in enough light for her to mix paint colours into the afternoon, though she downplays the importance of colour to her practice, “I’m not a colourist,” she states firmly.

There’s something ascetic about the space, and in the heart of a Melbourne winter, the temperature in here gets “Baltic” she says. Discarded one-use gloves and rags lie under a work table covered with tubes of paint, above the table hangs a nail with strings fastened to it, to fashion disappearing perspective points. Debono motions to an unfinished painting with chequerboard tiling, “The floor of that space is two point perspective.” In lieu of being taught linear perspective, she “just kind of made it up.”

Debono’s work desk is piled with yellowing books on early Christian art, and is also strewn with photographs. The photographs are of architectural interiors, indistinct streetscapes, mirrored surfaces – they look incidental but it’s from these snapshots that she mentally creates collages that form the basis of her oil paintings. She’s working on several canvases for Melbourne Art Fair, and the deadline seems to emerge too close on the horizon. How long will it take her to finish these? “Longer than I have left.”

“I am here from about 9 o’clock in the morning,” says Debono, “if I am not in by 10, I start to get anxious.” She’ll paint until five or six in the evening.

If Debono is not a colourist, as she maintains, then what excites her about painting? “Composition is very, very important to me. It’s the foremost thing that I care about with painting.” At art school Debono worked with collage and as such, her paintings are composites of her photographs and found images. “Most of the work happens on the canvas, I figure everything out in my head and on the actual work. I don’t have any patience for preparation. When I need to learn how to paint something new or draw something new? I just make it work.”

Debono discusses the painting with the chequerboard floor to illustrate her method of working. A Roman coin, rendered carefully in brown, is offset by Australian one dollar coins elsewhere that appear to have come into being through rubbing instead of painting. Behind them, she’ll add in fingerprints on paper. “This work is about tactility and perspectival space.” Debono mentions 18th-century Enlightenment thinker Denis Diderot who in his Letter on the Blind wrote on the nature of perception, that optics were a matter of both habit and experience when it comes to perceiving distances and perspective. He argued, says Debono, that “Truth must be able work for a blind person as well.” In The Optical Unconscious, art critic Rosalind Krauss summates Diderot’s argument as “perspectival space is tactile space.” Debono isn’t convinced by Diderot, “What about orientation?” she asks.

Her response is to disorientate the viewer in her compositions. In this painting’s middle ground, hanging plants are depicted in a photographic blur. “They’re really overexposed.” She’s painting them from “a really badly lit photograph,” which she enjoys, again, that predilection for the imperfect, or even the ugly. “Painting doesn’t map onto the world. There is a huge gap in the middle that painting can’t traverse. It doesn’t get closer to the things that it depicts – it actually maintains this distance. And photography, too and language. The dark matter that is subtending this whole practice is thinking about language.”

In October, Debono is heading to Rome for a three-month residency where she says she will be “really close to the Pope.” The residency fell in her lap – the British School at Rome (a 55-minute walk from the Pope in Vatican City) sought out a resident from VCA. After being shortlisted she was asked to write a submission outlining why she “deserves” the opportunity, she winces when recalling it – nonetheless Debono’s interests align neatly with the cultural history of Rome.

“I’m fascinated with Christianity and the history of image making in Catholicism, all of the theological interpretations of how images function. That’s massively my jam.” It won’t be her first trip to Rome, she has visited briefly but this time, she’s “going to sit and draw heaps. Sit in churches, draw.”

In the “distant future” in (the “Star Wars sounding 2020” as she says), Debono will have her first solo exhibition with Sutton Gallery. “It’s not that far away, and I’m planning something significantly ambitious in terms of scale.” 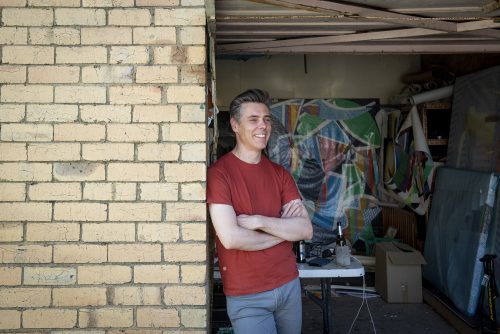 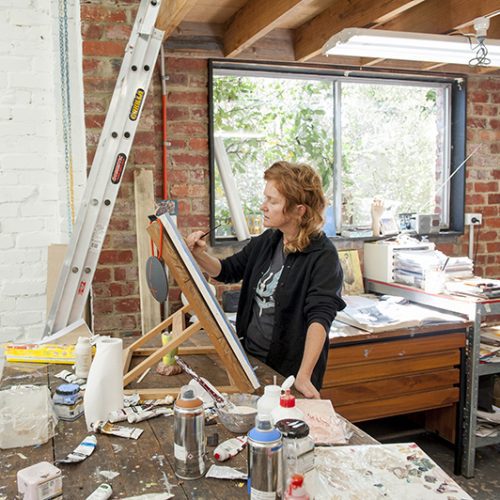 “I used to have a studio on Smith Street in Fitzroy, which I started with Damiano Bertoli, Ricky Swallow and Raafat Ishak. It’s still running today. But after more than 15 years, I moved to Reservoir and needed somewhere closer to home.” 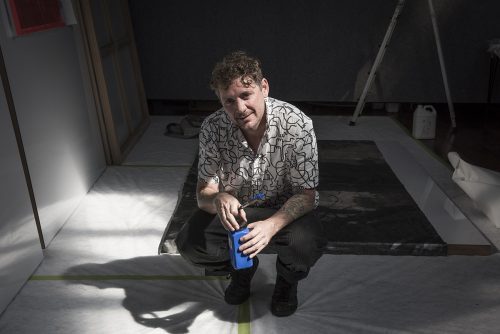 Brook Andrew’s astute interrogations of history and race are created from text and images in a quietly imposing warehouse studio.